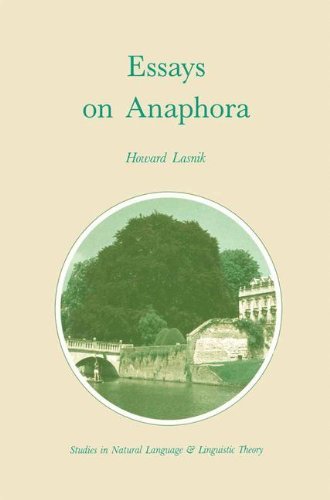 The articles collected in this book are concerned with the treatment of anaphora within generative grammar, specifically, within Chomsky's 'Ex­ tended Standard Theory' (EST). Since the inception of this theory, and virtually since the inception of generative grammar, anaphora has been a central topic of investigation. In current research, it has, perhaps, become even more central, as a major focus of study in such areas as syntax, semantics, discourse analysis, and language acquisition. Beginning in the early 1970's, and continuing to the present, Chomsky has developed a comprehensive syntactic theory of anaphora. The articles here are all related to stages in the development of that theory, and can best be understood in relation to that development. For that reason, Chapter 1 presents a historical survey of Chomsky's EST proposals on anaphora, along with brief indications of how the present articles fit into that history. Some of the articles here (e.g. Chapters 4, 8, and 9) proposed extensions of Chomsky's basic ideas to a wider range of phenomena.