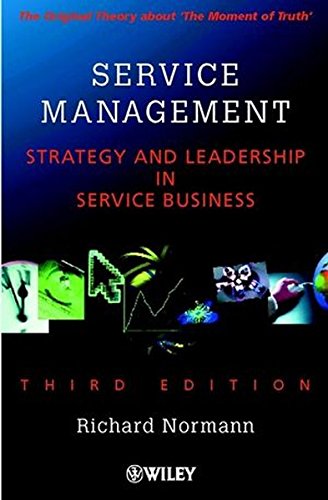 Intended for high-level executives in organizations whose 'products' have a high immaterial content, such as service, image or know-how, this work aims to be a comprehensive discussion of the management of service businesses, based on several years' research and consultation.

From the Back Cover
In the world of industry and management producing ′intangible products′ poses unique challenges. This book provides a comprehensive framework on these unique management issues and looks into the special characteristics of services and conditions necessary for success in the management of service organizations

This classic book, as relevant as ever and updated, provides a set of ideas which has proved its power and validity beyond the fads of the moment, over an extended period of time. A book that is at the same time very holistic and conceptual, and yet both easy to grasp and to translate into practical action.

It also evokes an alternative perspective on services, namely that of refocusing attention from the production and the product to the value creation process of customers. With these perspectivess every company todays needs to see itself as a service company.

The book stresses the need for a streamlined service management system and analyses and illustrates growth strategies and the nature of innovation –but above all it emphasizes the special role played by good leadership. In particular, this edition looks at the role of technology in services as well as – more generally –the role of services in society.

Of great value to managers and academics involved in the service industry this practical book, which has been translated into eight languages, will stimulate people to analyse and act on their situations.


Richard Normann is Group Chairman of SMG. He received his PhD from the University of Lund where he held a temporary professorship in parallel with his work as a consultant. He was President of SIAR (Scandinavian Institute for Administration Research) before founding SMG, The Service Management Group in 1980. He lives in Paris.

Richard Normann works as a management consultant on corporate and strategic business development mainly in Europe and the United States. Recently Richard Normann has also worked on national competitiveness at the country and regional level.

Through his consultancy work he has been involved in major consulting assignments in the USA, Japan, Australia, the Arab world and Europe, as well as acting as a researcher to the Harvard Business School.

In 1983 Richard Normann published the world's first book presenting an integrated framework on the management of service producing companies.

Service Management - Strategy and Leadership in Service Business was first published in 1983. A second, updated edition appeared in 1992. The basic framework and concepts remained, but the book was updated particularly in view of the increasing role of information technology in services.

The book is still read by many managers in its ten or so different language editions. Likewise, it continues to be standard fare for students at a number of universities and business schools. Several people have asked me for another slight brushing up of the book, still without compromising the fundamental framework. Here it is.

There were two purposes with this revision. One was to - again - stay in touch with new technological developments including the Internet era. So the chapter on technology has been revised with a number of new examples. On the other hand I have abstained from trying to make these revisions very deep and from trying to stay on top of all these developments. Frankly, one reason is that however much I would try, there would still be more modern and flashy examples before the book came out of the printing presses. Those interested in the impact of new technology have a multitude of other sources; I cannot and do not intend to try to compete with those.

The other purpose has been to use a few more modern examples and take out some oldish ones. Again, this has been done with some caution. If there is an original example or story which is as relevant today - which, in fact, could just as well have happened today - I have not seen any reason to change it. And even if the superb restaurant Troigros (which maintains its three stars in the Guide Michelin) has changed its physical layout to some extent I have kept the old text, since the same basic mechanisms are at work today as fifteen years ago.

In fact, the most important change probably is a reconfiguration of the content of the book.

Early on I introduce the metaphor of "the moment of truth" which I wrote extensively about in other contexts already in the late 1970s. I then introduce the notion of the service management system with its five components - the targeted customers, the service concept, the delivery system, the image, and the culture and dominating ideas. It is recognized that there has to be a fit between these various elements. But instead of then going to describe each of these elements, as in previous editions, I have moved the section of the dynamic interrelationship between them, expressed as the existence of "virtuous" versus "vicious" circles, forward.

I think the book has gained considerably in readability as a result of this. Introducing this mode of dynamic analysis and diagnosis of how things can go right or wrong first gives a better back-drop to the analysis of the various elements of the service management system than the original sequence which left the dynamic analysis to the end.

There are plenty of small adjustments here and there, and even the correction of a logical inconsistency that I discovered upon rereading the book. (I realized that I had confused, to some extent, the two ideas of peripheral services and of quality standards in describing the service concept.)

But having said this the book remains essentially the same. I actually do not think that it would be possible for me to make a really deep revision; that would be another book (which at this moment I am close to finishing).

Whereas a process of recognizing and focusing on the particularities of managing services - as opposed to industry and manufacturing - was at the roots of Service Management at its birth, the macro context of business is different today. At that time I think there was a real need to emphasize the distinction - indeed, to over-emphasize it for pedagogical reasons. And for those who run certain types of businesses the special characteristics of companies we used to think of as being in the "service sector" are still very relevant.

But it is now well over ten years ago that I myself discarded the notion of distinguishing services as a particular sector in society, producing intangibles. Rather, we may talk about a service logic, the basic premise of which is that it is not the delivery of a product (tangible or not) but rather the support of customers' value creating processes that is the battlefield for companies. And in this sense what we used to think of as manufacturing industry must adapt to this service logic. So the sector classification is no longer meaningful; what is meaningful is to understand the new logic. This was already a theme in the foreword of the second edition of this book. A really thorough rewriting of the present book would force me to clearly take this intellectual position and would therefore constitute a totally different book.

But, again, within its slightly more limited scope Service Management is about as relevant as ever.

I want to thank many people, including professor Birgitta Wadell at the University of Stockholm, for valuable inputs and comments. Peter Nuu and Eskil Ullberg have helped me with the section on new technology. Svante Leijon has read the old book and suggested many editing points for this edition. Kristina Boman, who has assisted me for many years, has worked through the manuscript and done the final editing, supplying many helpful suggestions in that process.

Deep thanks to them all, and to many of my friends and colleagues whom I have not mentioned but who have directly and indirectly influenced this book.