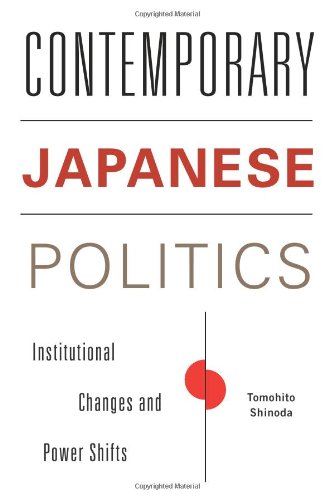 Críticas The Japanese political system has often seemed impervious to change and impenetrable to outsiders. Shinoda offers clear and convincing evidence that, from the Koizumi landslide of 2001 to the Abe landslide of 2012, profound institutional changes have altered the political landscape and have permitted a new balance of power among effective political leaders, the bureaucracy, and interest groups. His book is a must read for anyone interested in Japan and democratic governance. -- George R. Packard, President, the U.S.-Japan Foundation Changes in Japan's political environment over the last decade make for a unique and important study. Shinoda analyzes how these reforms introduced new power dynamics within Japanese governance and correctly notes that 'institutions do not produce leadership, they only enable it.' An excellent reference of Japan's political environment, governance, and leadership today. -- Richard L. Armitage, Former Deputy Secretary of State Reseña del editor Decentralized policymaking power in Japan had developed under the reign of the Liberal Democratic Party (LDP), yet in the1990s, institutional changes fundamentally altered Japan's political landscape. Tomohito Shinoda tracks these developments in the operation of and tensions between Japan's political parties and the public's behavior in elections, as well as in the government's ability to coordinate diverse policy preferences and respond to political crises. The selection of Junichiro Koizumi, an anti-mainstream politician, as prime minister in 2001 initiated a power shift to the Democratic Party of Japan (DPJ) and ended LDP rule. Shinoda details these events and Prime Minister Koizumi's use of them to practice strong policymaking leadership. He also outlines the institutional initiatives introduced by the DPJ government and their impact on policymaking, illustrating the importance of balanced centralized institutions and bureaucratic support. Ver Descripción del producto